Jan Dhan Yojana, Aadhaar and Mobile or ‘JAM’ are creating a buzz in financial inclusion space, not only in India but across the world. JAM has been jamming newsrooms and social media after being coined in the Economic Survey 2015 and the Union Budget 2015.

Let’s examine the JAM recipe in light of my prior professional experience against each of its components.
‘J’ refers to bank accounts opened under the National Mission for Financial Inclusion, more popularly known as the Pradhan Mantri Jan Dhan Yojana (PMJDY). The scheme, launched in August 2014, mandated banks (both public and private sector) to open up at least one bank account for each household in the country. The thought behind this ambitious scheme was to link each family with the formal banking system. Jan Dhan was not only about bank account opening and DBT. A bit of insurance (life and accident) and access to credit (overdraft) was inbuilt. This later evolved into market-priced, zero-subsidy insurance covers of life and accident (Pradhan Mantri Jeevan Jyoti and Suraksha Bima) schemes, at ridiculously low premiums. The beauty was that no fresh KYC was needed, auto-debit from bank account was done, subscription form was incredibly simple, and one could even subscribe by a simple SMS! The easy-loan scheme of Mudra also evolved out of good feedback from Jan Dhan overdraft component. So many things can piggy-ride on a bank account! We see new age in banking emerging in the form of Payment Banks, Small Finance Banks and Fintech. We have an opportunity to leapfrog, provided we don’t kill them with heavy regulation and old-fashioned banker-style thinking. We need to totally redefine and reimagine terminologies, namely: What is a bank? What is a branch? What is a passbook? What is a cheque book? What is KYC? and What is a transaction? Traditional banking channels and software (RTGS, NEFT, remittances) are expensive and slow; telecom channels (mobile money, m-Pesa) faster and less expensive; internet based channels (bitcoins or blockchain-based digital currency zipping over Internet, undiminished in value) much faster and almost zero cost. Will we see a WhatsApp moment in banking? Or will we let it go past us? The traditional incumbents will try every trick to kill the new-age players. Just as WhatsApp and Skype faced roadblocks from existing telecom players, new Payment Banks will face many overt and covert challenges from existing players. I hope that new Payment Banks are not killed in the womb, by traditional treatment of KYC, passbook, cheque book and old-fashioned branch concepts.

Now, let us talk about ‘A’ in JAM, which stands for Aadhaar, the unique ID given to each individual in the country by the Unique Identification Authority of India (UIDAI). There are many good things possible with Aadhaar.

First is obviously cleaning and de-duplicating any database such as voter list, ration card list, driving licence or passport, pensioners’ list, and so on. Our databases are in dismal state, and linking with Aadhaar can bring some sanity, by removing duplicates, and by having uniformity of basic demographic and address metadata, thus making these databases “talk” to one another.

Second benefit of centralised Aadhaar database is anytime, anywhere, online verifiable identity check (e-KYC), working on open API methodology. This can let us leapfrog over many developed nations, provided we can change regulation accordingly. Telcos may be wasting thousands of crores of rupees every year in collecting and preserving paper-based KYC documents. e-KYC done at telecom franchises can result in instant SIM card activation and zero paperwork. Similarly, if a person does not want a cheque book, then banks don’t really need a wet signature, and the bank account opening process could be made paperless and e-KYC based, saving the banks hundreds of crores of rupees every year, apart from being convenient for the citizen. The last component in JAM is “M”, which stands for mobiles

Almost every family in the country now has a bank account, Aadhaar and mobile. The “M” in JAM should not be restricted to mobile banking, but should stand for use of mobiles in various eco-systems. With over a billion cell phones in India, their reach is ubiquitous in the country – more than that of bank accounts.  Mobile wallets (Paytm leading the pack), mobile banking apps, SMS- based money transfers, *99# based services available on feature phones in multiple languages, etc. are gaining traction, but we all hope that the new Payment Banks and Fintech players will overturn many traditional concepts. The upcoming Unified Payment Interface (UPI), with open APIs, will make the electronic payment infrastructure quite seamless and is expected to enhance the acceptance infrastructure.

WhatsApp, Facebook, and e-commerce have taught many of our citizens the value of mobile-based transactions. They now demand government services to be available in the same convenient, faceless fashion. After the e-commerce, now health and education are the sectors witnessing disruption. With 2G/3G/4G expansion, and with prices of smartphones coming down (some say that 4,000 rupees is the tipping point, which already has been achieved – forget about the 500 rupees Ponzi!), we will see an explosion of Internet-connected smartphones, with private sector as well as government organisations offering a lot of stuff on mobiles!

Interesting days are ahead! Let us JAM!

The views expressed by the author are personal. 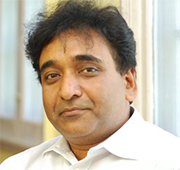